A Planning Committee has given the go-ahead for the detailed design of the much-anticipated Liverpool Cruise Terminal.

The city’s new terminal, situated within Peel L&P’s £5bn Liverpool Waters scheme, will be constructed at the Princes Jetty site. 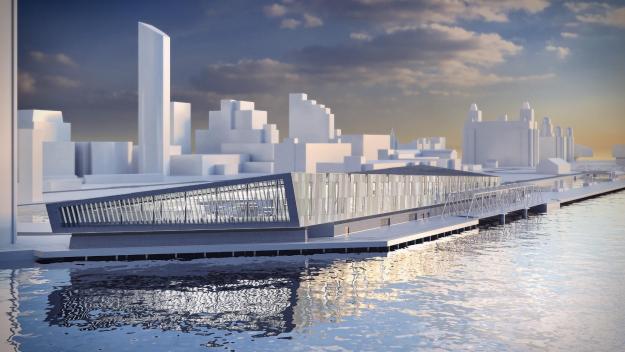 The proposal will enable the world’s largest cruise ships (up to 3,600 passengers) to embark and disembark at Liverpool, providing a world-class experience for cruise companies and passengers.

The cruise terminal is expected to directly create a number of local jobs.

The City Council’s Planning Committee voted unanimously in favour of the application for the detailed design of the development, following outline planning permission being granted in April 2018.

The 10,000 sq.m terminal will be built on a suspended deck on steel piles in the river, spanning two floors. It will boast a baggage hall in the ground floor, and the passenger lounge, café and check-in on the first floor.

The scheme will also include new public open space, hard and soft landscaping, and associated car and coach servicing arrangements.

The plans will see the derelict Princes Jetty currently in situ dismantled, with construction of the new terminal taking place at the site of the existing jetty in the River Mersey.

JLL worked alongside Ramboll to help secure approval for the project. Mike Hopkins, Planning Director at JLL, said: “This is a major investment in the expansion of the cruise liner terminal in Liverpool, and the proposed facility has been designed to accommodate the increasing demand in the cruise market.

“The proposal will be a landmark facility, which complements the historic Liverpool waterfront and helps to promote the city as an international cruise liner destination – generating new investment into the tourism and retail economy of Liverpool.”

Mayor of Liverpool Joe Anderson said: “This is the latest milestone in the re-emergence of Liverpool as a cruise destination. We are creating a world-class experience for the cruise companies and their passengers, and working with some of the very best in the construction industry to deliver the facilities.”

Darran Lawless, Development Director, Peel L&P for Liverpool Waters, said: ‘‘Planning permission being granted for the new cruise terminal is fantastic news for the city boosting the economy, creating new jobs and providing an opportunity to welcome tourists from around the world.

“Peel L&P gifted the land required for the new terminal at Princes Dock, Liverpool Waters to the City Council, ensuring Liverpool has the ability to accommodate growth from the cruise leisure industry and high level of interest in Liverpool and the North West from the world’s largest cruise ships.’

Dave Grove, Project Director, Ramboll said: “Having personally worked in the quayside area throughout my 20-year career at Ramboll, I am confident the approved design will meet the highest standards and needs of all who will use the facility. The whole design team are looking forward to delivering this exciting and vitally important project to the city of Liverpool.”

The council is also investing a further £32m in upgrading the A565 to support the new cruise facility and north docklands, and is gearing up to create a £20m link road to extend Leeds Street to the waterfront to support a new £30m Isle of Man Ferry terminal.

Site preparation works for the new facilities are expected to start in the New Year.